Aktuelle Seite: Start / English / The motorcycle is here to stay

It is easy for ‘outsiders’ to be negative about motorcyling, but we at FEMA have a different view. FEMA’s Dolf Willigers about the continuing success story of motorcycling.

Motorcycles play an important role in our society. Many people use motorcycles for commuting and leisure, professionals use them to do their work. The motorcycles developed from bicycles with an engine to highly sophisticated machines that provide safe, quick and clean transport. Yet they are ignored by policy makers, road authorities, mobility clubs and NGOs (non-governmental organizations) that deal with mobility. We think that motorcycles should and will play an important role in transport in future. 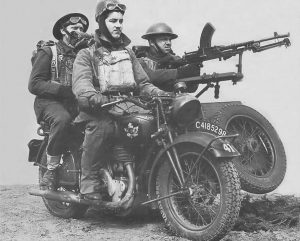 Motorcycles have always been important for mobility. From the end of the 19th century until today they are were used by (para-)medics to visit their patients. In fact, in many European cities the motorcycle made a come-back in the end of the 20th century as ambulances and are still used that way; In Ireland and the United Kingdom they are also used for medical dispatches. In the United States, the first motorcycles were already used by the police in the early years of the 20th century. The military started to use them on large scale during the first world war. It can’t be a coincidence that many early motorcycle manufacturers were also gun manufacturers. Soon motorcycles were also used by the happy few for leisure and racing. Mobility clubs started to use them for roadside assistance. After the second world war motorcycles were used by many workers as a relatively cheap vehicle for daily commuting and leisure. And this situation still exists.

Despite a heavy lobby from environmental and safety organizations for a future with only automatic driving cars, public transport, cycling and walking, motorcycling is still on the rise. The motorcycle industry in Europe reports a growing number of sales year after year. In 2019 the increase in sales was 8%. This contrary to the car industry, where we see a decline in sales. Not only the number of new motorcycles rises; more and more people get a motorcycle licence. We also see more and more women choose a motorcycle. 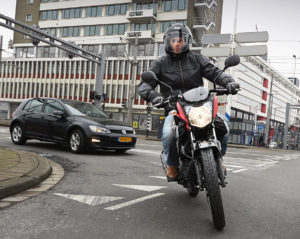 Motorcycling is often ignored by policy makers, road authorities and practically all organizations that deal with mobility. We are buried under loads of publications that tell us to switch to public transport, cycling and walking. But we have a different view. Road users in Europe recognize the advantages and joy of riding a motorcycle, they get their licence and buy a motorcycle. And with good reason. There is no quicker way to move to and in the cities than a motorcycle. FEMA members has proven this in 2014, 2017 and 2019 with the mobility tests. From time to time newspapers and magazines perform such tests too and come to the same conclusion.

One of the arguments used against motorcycling is the risk of having an accident and getting seriously injured or worse. We cannot deny that this risk exists. After all, motorcyclists do not have a protective cage around them like car drivers do. However, notwithstanding a growing number of motorcycles and riders, the fatal accident curves are lowering. Look at the graph, comparing the growing European motorcycle parc to the declining number of fatalities, and draw your own conclusions.

The number of accidents have declined thanks to safer motorcycles (almost every new motorcycle in Europe – except for the smallest category scooters – has ABS). Much is invested in better training, both pre- and post-licence, and more awareness by both the riders themselves and other road users. We’re not there yet, there is still room for improvement. We as a motorcyclists’ rights organization, but also the industry and other stakeholders have worked hard to make motorcycling safer and we are still working on safer infrastructure, safer motorcycles and better education and training. 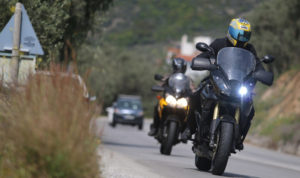 As for infrastructure, FEMA and its members work on a European, national and local level to enhance the infrastructure, by having roadside barriers fitted with motorcycle protection systems, remove dangerous obstacles, redesign crossroads, have roads better maintained. We work on better initial rider training and road safety awareness by motorcyclists and other road users. Some FEMA members even give traffic education to young people in schools. We also participate in European committees that deal with the development of automated driving cars to make sure that they are also safe for motorcycles. To make certain that motorcycles on the road stay safe, we disseminate the motorcycle recalls from the European Commission and we give fair information to riders about new developments.

Not only the safety of motorcycles and motorcycling has improved. We also see that motorcycles have become much cleaner. Emission limits have dropped spectacularly in the last twenty years. With the implementation of the Euro 5 standards this year, motorcycle emission limits are comparable with those of petrol cars and in some respects lower than that of Diesel cars. The graph shows how emissions have declined in the past 20 years from Euro 1 to Euro 5.

With the fast development and availability of electric motorcycles we are also heading to a situation where motorcycles and other powered two-wheelers are even more clean and silent. In some cities it is already possible to rent a moped-scooter for use inside the city boundaries. This has proven to be not only a fast way of travelling, but also cheaper than most other ways of travelling.

The post The motorcycle is here to stay appeared first on FEMA.